This past weekend was a busy one, as the Road to Wrestlemania kicked off. Fastlane was a barely average show, with no match going higher then ***1/2 for me, and the best match being on the preshow. Also on the preshow was Mauro Ranello instead of Michael Cole, which was fantastic. The show started out fine, with solid if unremarkable fights, but killed any momentum with the Edge & Christian/New Day/League of Nations nonsense, and an inexplicable Social Outcast segment. The main event was what it was, a well-executed match tainted by the inevitable conclusion.

WWE must have known a certain segment of people would be unhappy about Fastlane, because immediately after the show they tweeted out the official announcement of Shinsuke Nakamura joining the roster, with an excellent video on their website. When I checked about an hour after Fastlane, the Nakamura tweet had three times the number of retweets that Roman’s win did. Also, I got my “Best in the World Shinsuke Nakamura” shirt in the mail, the first thing I’ve ever ordered from Japan, and it’s beautiful. 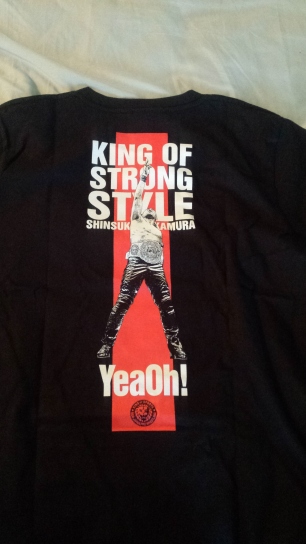 Then on Raw, we saw the extremely surprising return of Shane McMahon. Shane’s return is one of those things that people have loved to fantasy book for years, but I never did as I always thought it was too far out there. Apparently I was wrong. But while the McMahon family drama will probably never end, each week brings us closer and closer to the Destruction of Roman Reigns, as the crowd mightily cheered the dastardly heel HHH as he destroyed the babyface Reigns. Reigns is in a no-win situation, and I’m not sure it’s fixable before Mania.

The “Roman Reigns as a wuss” narrative has really taken off since the Royal Rumble. There’s even a popular conspiracy theory floating around among certain groups that his push is being sabotaged. It has some merit, but I try not to attribute maliciousness when incompetence fits just as well. The latest news is that Reigns, after being bloodied and battered by HHH on Raw, is having… nose surgery. Nose surgery. That has to be the least bad-ass surgery a person can get. They could have said he cracked his cheek, or his jaw, or orbital bone, or anything really. Instead, he’s getting rhinoplasty.

Compare his actions to that of his buddy, Dean Ambrose. When Ambrose gets sent to the hospital after having the crap kicked out of him by Brock Lesnar, he steals an ambulance, drives it into the arena, and challenges Lesnar to a match. That’s a guy people can get behind. When Roman gets attacked at the Rumble, he walks to the back and hides in the back. When HHH busts him open, he gets nose surgery. It’s mind-boggling. Recent news says WWE tried to get Batista to be the special guest referee in the HHH/Roman match, to “stack the odds” against Roman even more. News like that tells me they have no idea what they are doing with Roman.

And lets be clear, turning Roman heel will not help. We’ve gone too far for that. The ending of Raw was fascinating, for all the wrong reasons. HHH wasn’t the heel that night. He acted like a badass babyface, and the crowd responded accordingly. What can Roman do to “turn heel” against this and actually get cheered? Nothing. The only time Roman has been cheered in the past two years was when he was a bad ass. That’s what he’s built for. Roman shouldn’t be trying to imitate The Rock or John Cena or even Steve Austin. Roman should be an Everyday Brock Lesnar, tearing through lesser men like an unstoppable whirlwind.

There’s no doubt that Roman wins at Mania, no matter how many boos he gets. Vince McMahon has been denied his desired main event for two years in a row, it’s not going to happen again. I hope he enjoys it, because 100,000 people booing his handpicked face of the company might ensure that this is the last Wrestlemania main event Vince gets to decide.